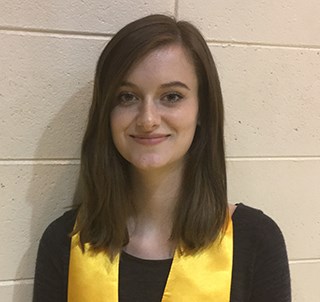 A relative’s advice sparked Ashley Kramer to forgo a traditional high school education for something different.

“I was in the ninth grade at Bryan County High School,” Kramer said, “and my aunt, a principal in Orlando, encouraged me to learn more about dual enrollment.”

She cites working with counselor Joanne Grossman for guiding her through the Dual Enrollment process. The results were that Kramer already completed her sophomore year at Georgia Southern University in May as she received her high school diploma.

“One of the greatest benefits of (Dual Enrollment) is that it has relieved my parents of a great financial burden,” Kramer said, “and prevented me from acquiring years of college debt.”

She was accepted into Georgia Southern after completing her sophomore year of high school and, according to Grossman, has served as an inspiration.

“Ashley has been a tremendous student role model for our school and the program for the last two years and has experienced great success,” Grossman told the Bryan County News. “All of us at BCHS wish her the best.”

Kramer has done her best to give back, working with non-profit organizations - D.A.R.E. Program, America’s Second Harvest and Encouragers Society. She’s also started a graphics business and received recognition for editing and graphic design for a weekly television program currently airing on the PBS network in Alabama.

“I love every creative aspect of graphic design and I love the thought of working in the film and television industry,” Kramer said. “My goal is to be successful in whatever I set out to do, and be happy while doing it.”

When advising fellow students about the future, Kramer says to be a leader, not a follower.

“Simply work hard, be true to yourself and don’t be afraid to chart a different path.”