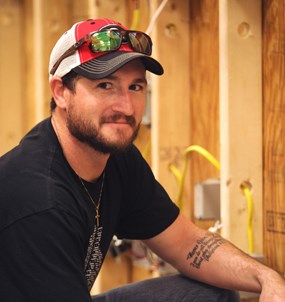 “Don’t be in a hurry to find your future,” said Josh McDuffie. The US Army veteran returned home to Georgia after serving his country and took his own advice for the next chapter of his life.

McDuffie went back to college and was on track for an Automotive Technology diploma when one electrical systems class changed everything.

“I piddled around and fell in love with this,” McDuffie told the Daily Citizen News from the Southern Regional Technical College (SRTC) electrical systems classroom. “I hit the ground running with Industrial Electrical Maintenance, and just liked everything about it.”

Thanks in part to the HOPE Grant, McDuffie earned diplomas in both Electrical Construction Technology and Industrial Electrical Technology.

“I’m trying to learn everything I can because becoming a licensed electrician is what I want to do,” said McDuffie. “Going through this program has provided me that opportunity and I learned about all my financial aid options through the SRTC counselors.”

Thanks to the counselors and faculty at SRTC, McDuffie showcased his talents this past March as he was named the 2018 SkillsUSA Georgia Postsecondary State Champion in Electrical Construction Wiring.

“The old saying that ‘there is no substitute for hard work’ holds true with Josh,” said Stephen Mathis, SRTC Electrical Systems Technology faculty. “He has worked harder than any student I have had in the last five years. He put in hours of extra work preparing for the SkillsUSA state competition and continues to do the same for the upcoming national competition in Louisville. It has been a pleasure to work with Josh and watch him grow in this field.”

It’s a field that McDuffie hopes to one day pass down as the start of a family tradition.

“Receiving this award has me and my wife excited. It has made me even more goal oriented and focused on my future career,” said McDuffie. “Maybe one day, later down the road, I’ll have my own business and this trade will be something I can share with my two sons. That would be nice.”