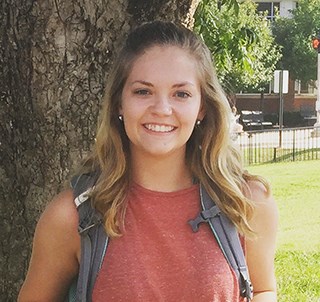 Laura Vinson’s advice: “Be prepared to be unprepared.”

While this can be applied to dealing with the first year of college, it also serves as a life mantra for a 19-year old who’s gone from the tragedy of losing her mother at an early age to the triumph of having Governor Nathan Deal attend your high school graduation.

“Change always happens (and) if you are anything like me, then change gives you some sort of anxiety,” Vinson said. “However, to deal with that, I learned that being unprepared for what might happen helped in making change flow easier.”

While growing up in Clayton, her father lost his business while raising three children on his own. Therefore, helping Laura’s sister pay for college wasn’t possible.

“I was told at a young age that I did not have a great chance of going to college unless I worked hard in and out of school to earn scholarships and other types of financial aid to help me,” said Vinson. “Watching how hard (my sister) struggled paying for college on her own with little helped scared me. I was afraid I would not make it.”

As a seventh grader at Rabun County Middle School, “the principal and counselor handed out REACH scholarship packets to a numerous amount of students,” said Vinson, who was part of the inaugural class of REACH Georgia Scholars.

"When I was honored with the REACH scholarship, my outlook changed tremendously,” said Vinson. “I had something to motivate me. It gave me a new found hope in pursuing my educational dreams.”

That hope was noticed by Governor Deal, who according to the University of North Georgia Newsroom, “was so impressed with her poise and maturity that he took her to other functions as the de facto spokesperson for the program.”

“We are proud to have Ms. Laura Vinson attending UNG as a REACH scholarship recipient,” said Dr. Tom Ormond, provost and senior vice president of academic affairs. “Based on the competitive nature of the REACH scholarship and the education successes (she has) enjoyed to date, we are very hopeful (she) will achieve (her) academic dreams while at UNG.”

To date, Vinson’s career dreams are undecided. However, her success as a REACH Scholar has fortified her future.

“Not only did this program open my mind about going to college, but it taught me who I was and what I was capable of doing,” Vinson said. “It broadened my horizons and helped me be an example for others in a similar situation.”