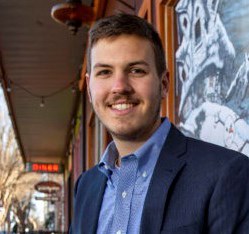 There wasn’t much debate where Trey Leonard would end up after graduating from Lowndes High School.

“For as long as I can remember, I have donned the red and black, and as I moved through high school, applying to UGA became an obvious choice due to its clout in the Southeast as well as Grady College’s prestigious programs,” Leonard said to UGA Today. “I did end up applying to a variety of other schools across the country but never seemed to take them very seriously as four years in Athens kept lingering in the back of my mind.”

As his time in Athens quickly comes to a close, Leonard is expected to graduate this spring with a degree in Entertainment & Media Studies and International Affairs ­­– minus a substantial student debt.

“My family and I have felt incredibly blessed during my collegiate experience” said Leonard, “because the Zell Miller Scholarship has eased the financial burden of tuition as I have pursued my degrees from UGA.”

When he was just starting high school, Leonard learned about the state scholarship that provides full tuition at public HOPE-eligible postsecondary institutions like UGA.

“My school counselor, Dr. Dana Hutchinson, encouraged me to learn more about the programs,” he said, “because she knew that I wanted to attend an in-state university for my undergraduate career.”

His post-graduate career is focused on creating his original ideas and scripts. Leonard has already produced three student documentaries, one of which was nominated for a Southeastern Student Emmy. His success and financial stability has allowed the pursuit of other endeavors like study abroad programs in China and Australia.

“Having the Zell Miller Scholarship has allowed me to pursue other endeavors that have tremendously impacted my personal and professional growth,” said Leonard.

Regardless of what your personal and professional goals may be, Leonard advises Georgians to whole-heartedly believe in themselves.

“I would suggest never giving up on a commitment and seeking ways to elevate yourself in any field or position you find yourself in,” he said. “Always challenge yourself to innovate and think differently in order to bring your own unique voice to any endeavor.”